In my defense—and I do think this is a robust defense—the world went completely and utterly to shit in 2020, even moreso than it had been doing for the rest of the past half-decade, so I don't blame myself for this! But still, there are a ton of things I want to do and I really want to finish some of them!

There are a few things! Here's a big one: just a few weeks ago I finally completed the first draft of a novel, a fantasy novel with the working title The Necromancer's Daughter. I've written a fair bit of short fiction before, including a collection of surrealist flash fiction, a few pieces of poetry I'm reasonably-not-ashamed of, and some short stories that I haven't put online, but I had never completed a full novel, despite a few very bad attempts at writing science fiction novels during high school.

I'm proud of having finished it, but it's a first draft of a first novel: the writing is clunky, the plotting is awkward, &c &c. I'm stepping away from it for a little bit but I'm planning on taking time this year to edit it into a second draft and then see about publishing it. I have no idea what this process looks like, much less how it works in a time of COVID when I'm also working an unrelated full-time job, but I'm excited to find out!

Another thing I have arguably “finished” is Lament Configuration, a self-hosted Pinboard-like bookmarking service. Both my web design sensibilities and my web design tools live firmly in the past, so Lament Configuration is a bit of a throwback in terms of how it works and is implemented, but I'm proud of where it is and I've fully switched over to it for storing links on my own self-hosted instance. It's not necessarily completed, but it's usable for myself and a small group of friends, and that's not nothing!

I've also been honing a few other skills in anticipation of not-yet-finished projects. For one, I've been working on page layout, both for personal prose projects and for tabletop-related projects. Earlier I mentioned my surrealist short fiction: I'm going to be putting together a tiny chapbook of all of those, and I've already got the layout all done, which means I just need to take the time to find a printer for chapbooks. I'm also working on some small (chapbook-sized) tabletop projects. Both of them are letting me get more familiar with the tools for doing these layouts and experiment with what works and what doesn't. For example, here are two pages from different projects: a title page from my short fiction chapbook on the left, and a page from a tabletop project on the right:

Another skill I've been honing is 3D modeling. I've tried learning Blender before, but this year it's really started to stick in a way it hasn't before. My specific focus is wanting to learn 3D modeling for video games, so I've been sticking to styles which will work for the kinds of video games I could theoretically make on my own, without a massive team of artists and while also doing the design and programming myself (to say nothing of music and sound and writing and so forth.) For example, I've been working on flat-shaded low-poly modeling, which has been great for figuring out how to build the shapes I want without worrying about texturing: 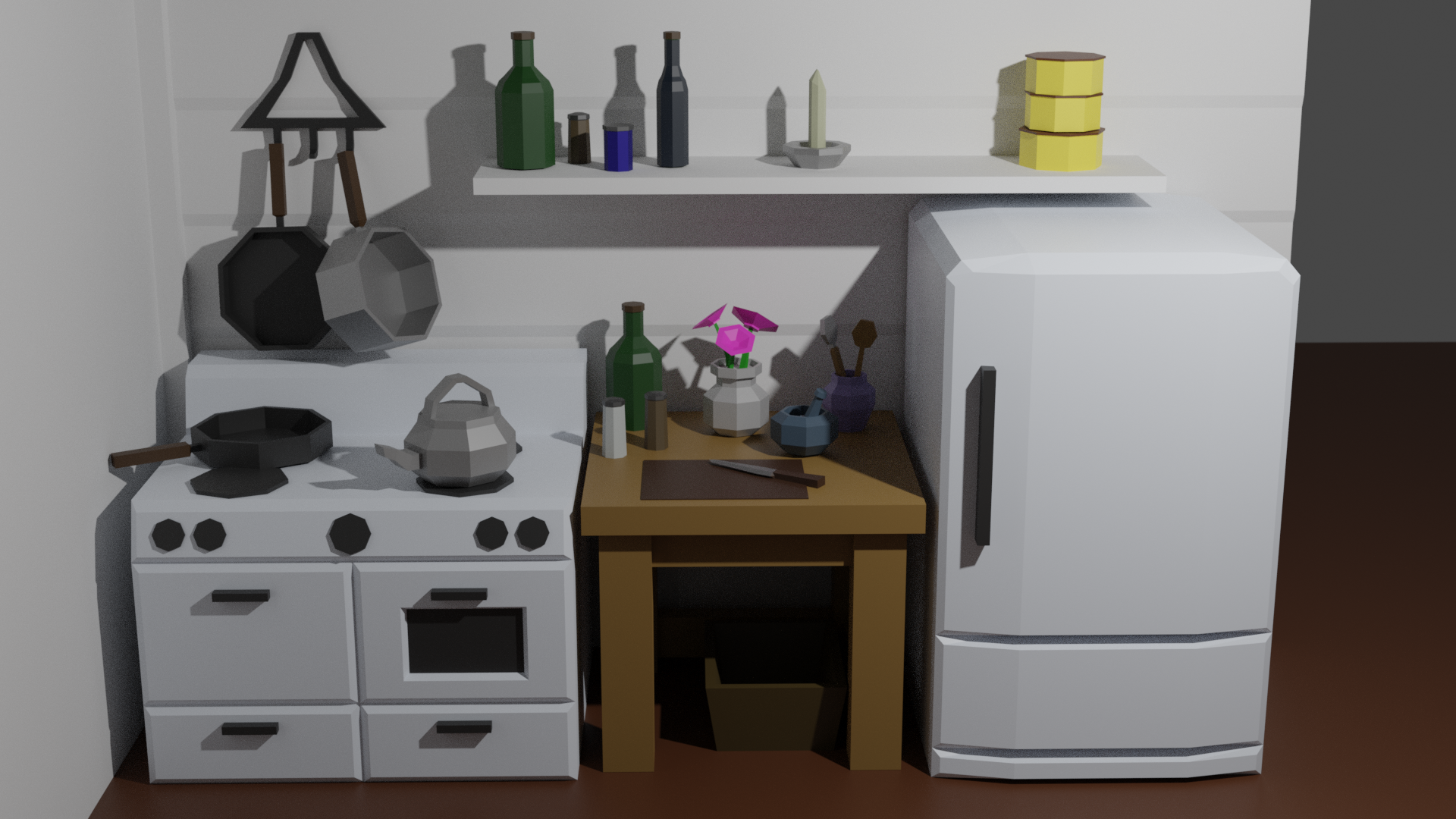 I've also been working on a style of blocky low-poly model that uses pixel art for textures, which is yet another style that's accessible to an individual trying to build entire scenes without a team: 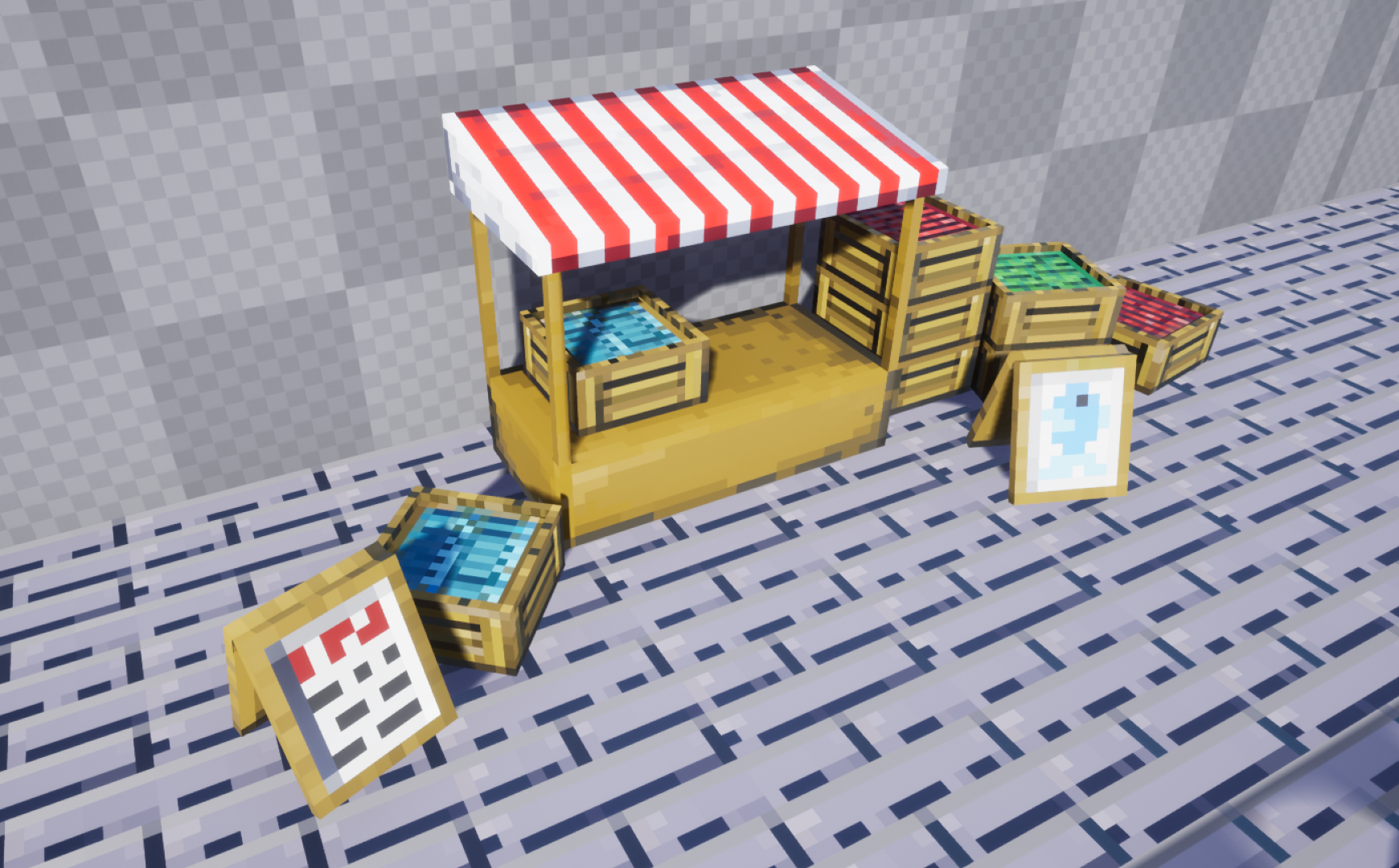 Neither my typographical work nor my 3D work have yet resulted in “finished” projects, but I'm not disappointed in that: I'm happy I've flexed those muscles further, and I'll have those skills around for when I need them!

I've already mentioned a big one: I'd like to publish my novel! I've gotten some early positive feedback on it from people close to me, but they are, after all, people close to me. I do think there's something there in this draft, and I hope to find out what it'll take to bring it from awkward draft to a published novel.

I'd also like to write some more this year. By this, I mean writing more fiction—finishing some unfinished short stories, maybe starting another novel—as well as some lightly technical non-fiction. In particular, I've found that when blogging on my programming blog I really like to discuss ideas for a technical-but-not-specialist audience, and I also like doing technical history (e.g. this post of mine on the history of algebraic data types) and I'd like to combine those goals into a piece of long-form writing. We'll see where that goes, but I've got ideas as well as a potential collaborator who might be able to keep me on track!

And on a technical note, I've got some programming I want to do as well, but honestly less of it than before. That isn't to say that I won't program: I expect I'll do plenty of it, and I've got a number of small projects (compilers and libraries and tools) that I will poke at, but many of those feel more like ongoing concerns or means to an end than “projects” I am pushing myself to finish. Still, a smattering of programming projects I'll likely work on include a graph grammar authoring tool I'm calling palladio, a barebones storylet engine I'm calling rakonteto, and a wiki I'm calling baba-yaga.

However, that's not the only programming I'm going to do, because in 2021 I'd like to finish at least one small video game. I have a bad habit of gradually dreaming up grander and grander ideas, so I need to really limit myself: even ideas I've come up with tend to get too big for me to finish, honestly. Still, if I get even a tiny game-jam-sized project done, I'll be happy. (And to be clear, “finish” here means something like, “Get playable and put it on itch.io,” rather than trying to find a big publisher or even necessarily find an audience. I'd be totally happy creating a tiny weird game that four people ever play and nobody ever gives me a cent for!)

And I've got two or three tabletop projects I want to finish, as well. I had a screenshot of one of them above: a fantasy bio-punk Blades in the Dark hack about an arboreal city where people use plant-magic to grow their surroundings. I've got a few other ones that are small-sized and can at least get to playtest stage, like a Megaman-inspired party game called Get Equipped and a Silmarillion-inspired asynchronous storytelling game called The Last Alliance of Men and Elves, and maybe a few more: we'll see!

A few thoughts on projects

I'm still disappointed I finished fewer projects than I wanted to last year, but the reason for my resolution—”finish a project a month”—was not about actually being done with any specific thing. I don't mind having several projects in flight, and I don't think I'll ever stop doing that to some degree. The inventory above was mostly projects I think I can finish this year: I've got several more on backburner with varying levels of intention to finish, and I'm well aware that I won't finish half of them. That's okay!

But also a finished project exists and can be shared with others. And getting to the point that I can finish projects, both by being comfortable with the finality of a finished project and by being capable of the planning and legwork to finish the boring parts, is the only way I'll be able to share the things I want to share.

So I'm not gonna put a specific schedule on project-finishing this year, and anyway, the pandemic is still on, so any specific plans are ripe for skewering by our distressing present moment. But still, I'm going to keep learning to finish projects, and hopefully next year I'll be able to point to things I've completed and shared.